The Bride of Amman by Fadi Zaghmout, translated from Arabic by Ruth Ahmedzai Kemp: Book Review 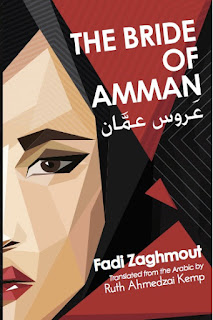 Passed university with distinction? Good, you are well enough a bride material now.
Thirty and unmarried? Bad, you've almost reached your expiry date.
Did your father take your virginity? It's okay. Keep quiet.
Do you love someone of another religion?  Beware,you might be soon ostracized from your society.
Are you attracted towards the same sex as your's? Worse, control yourself, get married and have children.

Author Fadi Zaghmout shares such social taboos that have confined young Arab men and women to the deepest corners of their beings. The Bride of Amman is a tale of five young dwellers of Amman, the capital city of Jordan where gender inequality and gender discrimination, make them struggle through their everyday lives.

Published originally in Arabic, the book is translated by Ruth Ahmedzai Kemp.

Leila, Salma, Rana, Ali and Hayat! Their lives are examples of the social pressures that young Arabs face with respect to their sexual rights. What's common among all of them is that all five respect their religious values and fear God. However, when their natural instincts guide them to do something that would be considered 'against the norms', they are split between their hearts and minds.

Leila passes her university degree with distinction. However, her family and neighbours remind her that it's her potential as a wanted bride that's more important. As luck favours her, she meets Ali, the love of her life and they get married with the blessing of their parents. All goes well until she accidentally discovers the true identity of her husband, two years after their marriage. It explains his lack of sexual inclination towards her all along. And now it's up to her to decide their future!

Salma is Leila's sister who is considered almost an expired product because she's thirty but not married yet. For some reason, she could not accept any of those grooms that her mom matched for her. More than living a spinster life, what despised her is being looked at with pity as though she is a rotten being. What added fuel to her heartaches is that her younger brother and sister have found their matches at their right ages. At one point, she felt enough of it. And takes charge of her fate!

Rana is aware how impossible getting married to a person of another religion is. However she not only falls in love with a Muslim but also becomes pregnant by him while they are still studying in the university. For what she has done, she must have been killed if it not were for the unexpected that follows.

Ali struggles with his sexual orientation since childhood. Being a homosexual, he doesn't mean to hurt his wife Leila but social expectations lead him towards a deceitful life. When the time is up to confront the truth with Leila, he leaves their future in her hands.

Hayat's pain is indescribable. When a man who is supposed to protect her turns a beast on her, she decides to give herself away to men unknown. She replaces the emptiness she struggles without a true love in life by having multiple sexual relationships. As her destiny changes, she completes the tale in a beautiful way.

Their stories are not narrated by words. Instead, they are lived through the pages. Author Fadi Zaghmout has gone a step beyond narration to inject emotions into his words. The main characters speak for themselves, by themselves. The narration is of first person by all five of them. This adds beauty to the plot in that the struggle that each undergoes within themselves can be directly perceived from each one's perspective.

I have never met a homosexual before. But now I know what they feel at the depth of their being; why they shouldn't be made fun of. I have never met a person who has been raped by her father. I have never felt concerned about a women who willingly has multiple sexual relationships. But now I realize that there must have been wild stories in their past that have turned their lives upside down. And that's where this book stands tall! If it can make a reader contemplate on the very point that the author has taken to handle, that's the author's success. In that way, author Fadi Zaghmout has given us a successful debut book.

The gender discrimination discussed in the plot is not something that's prevalent among the Arab countries alone. Many of such gender inequality issues are common elsewhere too, including India. The author has brought into light, an important revolution that a few orthodox societies in the world need.

Not to be overlooked, Ruth Ahmedzai Kemp has done a brilliant job with his translation.

A few excerpts from the book:

"We all get used to wearing masks in our lives so that we can blend in with the crowd. It's a heavy burden to bear full-time, and when you have to wear that mask even in the presence of the people closest to you, it becomes even heavier, more fragile, and more difficult to carry." (Page 64)

"I was astonished  to realize the power our cultural heritage exerts over us. It knows no geographical or social boundaries. It is a form of baggage we carry with us wherever we go." (Page 197)

"There is a set of minimum achievements we're all supposed to accomplish, and if you fail to tick all the boxes, you are seen as a disappointment and this eats away at the respect people show you." (Page 199)

"Are our ideas like our clothes? They seem to fit initially, but they become too small for us as our awareness about our surroundings grows, and then it's perhaps time to throw them off and replace them with new ways of thinking." (Page 227)

Reviewed for the Publisher

Disclosure of Material Connection: I received this book as a complimentary copy from the publisher in exchange for a honest review. I was not required to write a positive review. The opinions I have expressed are my own.


The Bride of Amman, a huge and controversial bestseller when first published in Arabic, takes a sharp-eyed look at the intersecting lives of four women and one gay man in Jordan’s historic capital, Amman—a city deeply imbued with its nation’s traditions and taboos. When Rana finds herself not only falling for a man of the wrong faith, but also getting into trouble with him, where can they go to escape? Can Hayat’s secret liaisons really suppress the memories of her abusive father? When Ali is pressured by society’s homophobia into a fake heterosexual marriage, how long can he maintain the illusion? And when spinsterhood and divorce spell social catastrophe, is living a lie truly the best option for Leila? What must she do to avoid reaching her ‘expiry date’ at the age thirty like her sister Salma, Jordan’s secret blogger and a self-confessed spinster with a plot up her sleeve to defy her city’s prejudices? These five young lives come together and come apart in ways that are distinctly modern yet as unique and timeless as Amman itself.


Fadi Zaghmout is a social-media specialist, blogger, and author. His first novel The Bride of Amman was published in the Arabic language in Jordan in January 2012, addressing issues of gender and sexuality in the city of Amman. His second novel, Heaven on Earth, was published in November 2014; it is a work of speculative fiction that posits a near future where science defeats ageing. Fadi holds an MA in Creative Writing and Critical Thinking from the University of Sussex in the UK. He has been an active blogger since 2006 and has a Twitter following of around 370,000.


Ruth Ahmedzai Kemp is a British literary translator of Arabic, German, and Russian fiction and non-fiction. She is the co-translator of Samar Yazbek's The Crossing and has translated plays from Russia, Syria, and Lebanon, and several arabic short stories and children's books.
Posted by Nandhini at 14:33 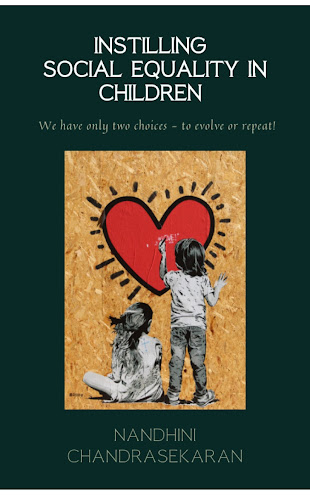 The book discusses practical ways to bring a change in our everyday lives to raise an equality-conscious generation. 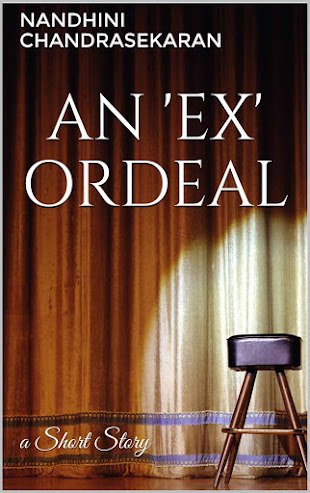 What can calm a woman’s buried anger, and her ego-filled nerves which crave for the acceptance that had been lost in her yesteryears? Neeraja, in her sixties, finds the secret cure in “An ‘Ex’ Ordeal.” Her tale is for all the women who are struggling with emotions of their past. 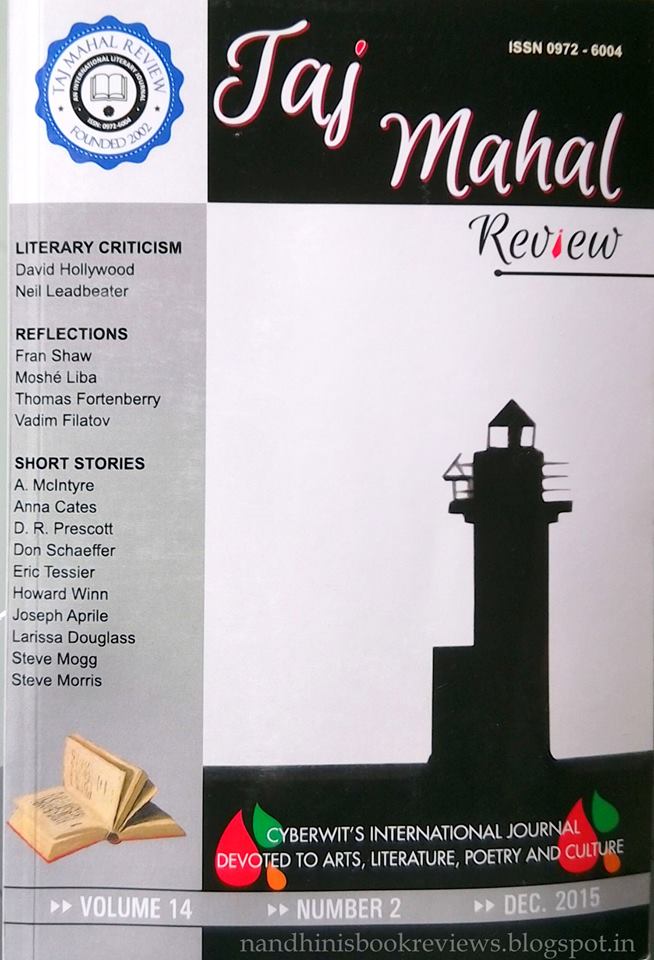 Blame it on Destiny by Soorina Desai 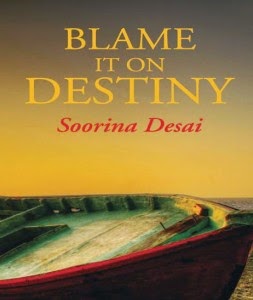